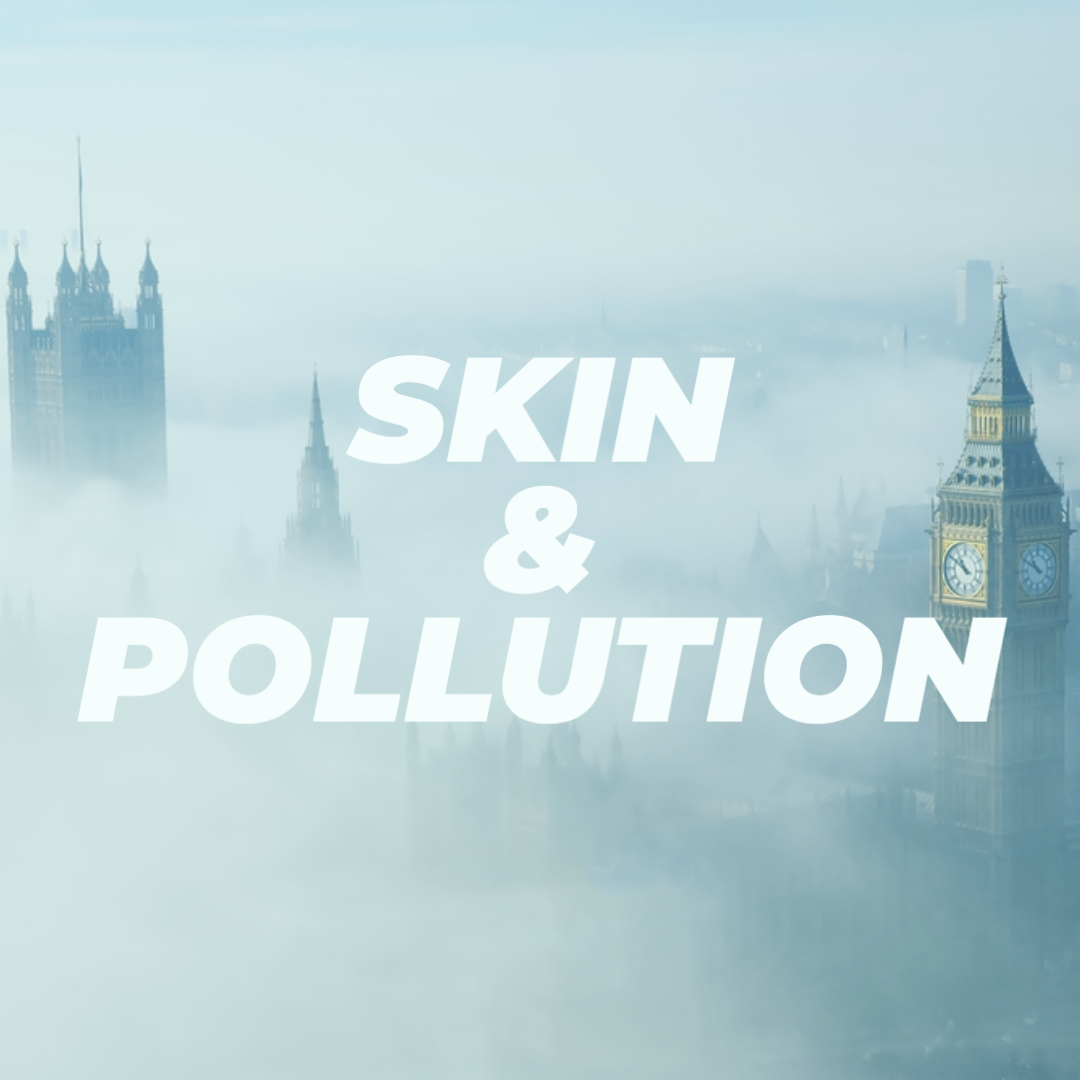 Impact of air pollution on the Skin

Do you know that our largest organ, the human skin, plays the role of a barrier and is also very exposed to aggressive air pollutants?  Thus, living in London means that we are heavily exposed to pollutants that have an impact on our general health and on our skin.

As a matter of fact, this is a concerning and widespread issue as nearly 90% of the world’s population breathes air containing a high level of pollutants (WHO, 2017).  In 2019, air pollution was considered by the World Health Organization to be the biggest environmental health risk to humans. While the level of pollution outdoors is very concerning, we also face heavy pollution indoors.

Indeed, according to a study carried out by the National Air Quality Testing Services, the air inside our very homes is almost three times more polluted than outside. To illustrate, this is due to toxic compounds found in cleaning products, home furnishings, and even building materials as well as emissions by some cooking appliances.

Skin is the body’s first line of defense against the environment.  The skin consists of two main layers, the epidermis, and the dermis. Below the dermis lies subcutaneous fat tissue. Fibroblasts in the dermis create an extracellular matrix containing collagen and elastin fibers. The epidermis contains mostly keratinocytes that rise to the skin surface as they develop to form the superficial part of the epidermis, the stratum corneum (SC).

Unclothed areas of skin are chronically exposed to environmental aggressors and stressors such as UV light and other pollutants as mentioned above.

However, antioxidants are present in the deeper levels of the stratum corneum. Therefore, the outer layer of skin is left exposed unprotected from oxidative stress and other aggressors.

The stratum corneum (SC) is the first target of UV light and pollutants such as ozone (O3).  Free radicals are formed during sun exposure, depleting the skin’s natural antioxidant stores, creating oxidative damage to the skin. In turn, this creates inflammation on the skin.

Studies have shown a direct correlation between exposure to air pollution and an increase in the appearance of skin aging.

Many studies found that our skin is under ever greater assault from pollution and toxic elements in the environment with detrimental effects. Furthermore, inflammation and the resulting accumulation of ROS play an important role in photoaging and other forms of skin problems including cancer.

Consequently, when the skin interfaces with the atmosphere, the pollutants gain entrance through the skin surface, the sweat ducts, inhalation, ingestion, and also absorption via the hair follicles. And as a result, pollutants impact our skin by generating destructive free radicals which cause oxidative stress.

Alterations that disturb the skin barrier function are involved in the development of various skin issues and diseases. The protective ability of the skin can be compromised and problems arise when an abnormal exposure to environmental stressors exceeds the skin’s normal defensive potential (Valacchi et al., 2012). Here below, you will find some of the skin disorders associated with pollution:

There is a strong body of evidence that links pollution to inflammatory acne (Krutmann & al., 2017). Particularly, living in polluted areas and big cities exposes us to free radicals which causes inflammation in the skin. As mentioned before, our body’s main function is to maintain homeostasis by disposing of toxins from the main channels of elimination. However, if the body is unable to effectively eliminate toxins then it could lead to adverse reactions such as acne, sensitivity, or rashes on the skin. actually, we are today witnessing an explosion of acne in the adult population!

Atopic dermatitis (AD) is a common, heterogeneous, chronic‐intermittent, eczematous skin disorder that starts at infancy or early childhood and persists in adult life.

There is evidence-based medicine showing that outdoor air pollution is related to the exacerbation of atopic diseases, and eczema.

Lentigines are small brown macules located typically on the face, hands, and chest. Variously called liver spots, can be considered a sign of premature aging.

Melasma is a benign light- to dark-brown hyperpigmentation mostly over the face but at times also involving the neck, chest, and shoulders. For instance, Particle Matters (PM) increase the number of reactive oxygen species (ROS) that trigger the increase of metalloproteinases and lead to aging, which includes skin hyperpigmentation.

Skin barrier dysfunction can be caused by pollutants. As a result, abnormal skin barrier integrity causes increased skin inflammation and other issues.

It is known that pollution negatively affects psoriasis and environmental pollutant exposure may compromise immunity and can predispose to worsening of psoriasis.

In particular, Cadmium, found in battery and television manufacturing and the aircraft industry, is one of the air pollutants that affect the pathogenesis of psoriasis (Kamiya et al., 2019).

Additionally, pollution is also associated with an increased risk for skin cancer (Baudouin et al., 2002). UV radiation is one of the main factors responsible for most skin cancers. A recent study states that “ambient air pollution, have likely contributed to the increasing incidence of cutaneous malignancy globally”. (Parker, 2020)

Take care of your skin

As we have seen, we are exposed to so many pollutants outdoors and indoors. Therefore, taking care of your skin such as facials is not pampering but a necessity. Moreover, pollutants increase the risk of aging and that is why we offer treatments that can help cleanse, improve pigmentation, texture as well as help create collagen and elasticity.

Find out more about the treatments for Skin we offer or book a free consultation at Nar London, Harley Street.

Sorry, the comment form is closed at this time.

Any cookies that may not be particularly necessary for the website to function and is used specifically to collect user personal data via analytics, ads, other embedded contents are termed as non-necessary cookies. It is mandatory to procure user consent prior to running these cookies on your website.